Helios is the Unsung Story of the Sound of British Rock*

*Note all photographs are copyright of their respective holders, unless in public domain.   They are being used on this page for educational purposes.   If any copyright holder wishes that I remove a photo from this page, please email me at rob@chateaurosu.com and they will be taken down.

The advent of progressive pop and hard rock music at the end of the 1960s meant that the prior practice of being able to casually record an entire pop music record in one day were over.  Musicians and recording engineers alike were looking for ways to capture what they were hearing in their heads, with a sonic clarity, yet musical sheen that would turn listeners' heads.  Studios were busier than ever.  Music  was becoming aural fashion.   It was the dawn of a golden age.

In London, the workhorse Olympic Studios needed recording equipment that would enable them to compete with Abbey Road Studios, made famous by the Beatles.   They turned to their technical director, Dick Swettenham, a prior employee of Abbey Road, who told them he could personally build them a console that sounded more musical than anything yet heard, if only given the parts and budget to do so.

His suggestion was approved, and in short order a young American guitar player named Jimi Hendrix was one of the first to use the new, hand built console at the studio.  Word of this revolutionary guitar player and the incredible studio sound he was getting spread like wildfire among the upper echelons of Britain's music community.   The Rolling Stones and Led Zeppelin were both early users of the console and this new "British" sound of rock was well on its way to becoming legend.  Talent helped of course - but there was something magical in the handmade sound of the Dick Swettenham recording console. 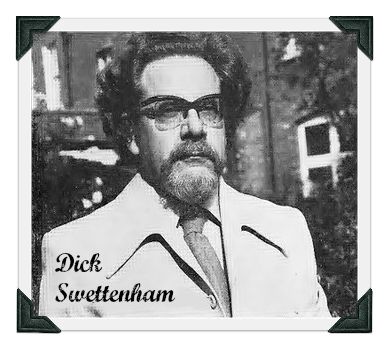 Elsewhere in London, Chris Blackwell of Island Studios, owner of Island Records, wanted a Dick Swettenham built console, but he could not legally breach Olympic's employer relationship with Swettenham.   Blackwell decided the only way he would get consoles for his studios was to invest money and enable Swettenham to leave Olympic and launch his own independent company.  Thus the Helios was born. 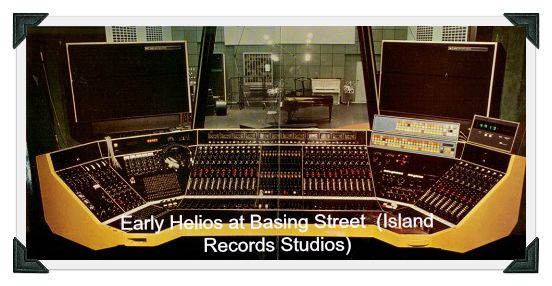 From 1969-1978, Helios, operated as a boutique company, building around 125 custom recording consoles, not only for commercial studios across Europe and the United States, but in many cases for the personal recording needs of the nobility of rock music, establishing project recording studios in top musicians' homes decades before the home computer recording revolution began, and long before anyone had ever heard the term "project studio."

Of the many consoles that were built, the then young entrepreneur Richard Branson of Virgin Records ordered three consoles for the studios he owned, including a mobile studio named the Manor Mobile.  The Who built a studio around a Helios console.  Eric Clapton ordered a small Helios console for his home.   But one of the most successful and innovative uses of a Helios console was when the Rolling Stones decided to have a Helios built into a BMC commercial truck.  Suddenly top music acts like Led Zeppelin could rent the Rolling Stones Mobile and roll it up to wherever they wanted to record and take their musical inspiration from a house in the country side outside the pressures of a commercial studio.   Even recording live shows was now possible.
The most famous use of the Rolling Stones Mobile was when Deep Purple rented it to record their new album in Switzerland in 1971.  They were attending the Montreaux Jazz Festival and watching Frank Zappa perform, when "Some stupid with a flare gun" "burned the place to the ground."  As the festival promoter Claude Nobs ran "pulling kids out the ground,"  two of Deep Purple's roadies rushed to the Rolling Stones Mobile that was parked dangerously next to the Casino, which was quickly becoming an inferno.   They had to smash a window in the cab and move the truck just in the nick of Swiss time. 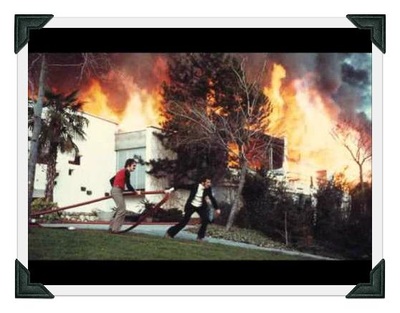 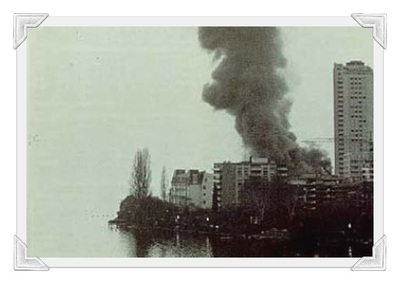 As Deep Purple had planned to record their album at the now destroyed Casino, they "had to find another place."   Rushed into a temporary location after newly penning the story of the conflagration, the mighty "Smoke on the Water" was recorded, amazingly, with the Swiss police banging on the door at the end of the final take.   Finally they settled on the Grand Hotel on the "Lake Geneva shoreline."  It was conveniently abandoned for the winter season.   The Rolling Stones Mobile was parked next to the Hotel, and in the hallways and guest rooms of the Hotel, Deep Purple made history recording Machine Head- an album that would guarantee a thirty plus year career to follow.   The recording lines were so long to the microphones and the weather so cold outside, that soon even a few beers could not warm up the band enough to travel into the truck and listen to playbacks on the speaker mains.  They trusted the engineer, Martin Birch.  The sound of the Helios was so compelling that Deep Purple would often return to use it no matter where the consoles were located.  One of these studios was the famous Musicland Studios in Munich Germany. 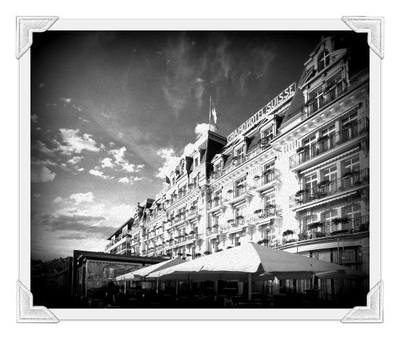 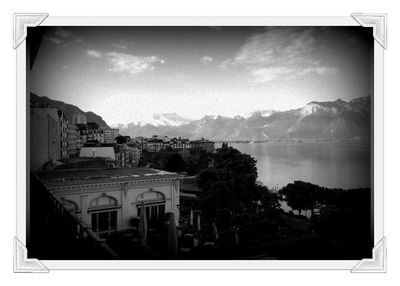 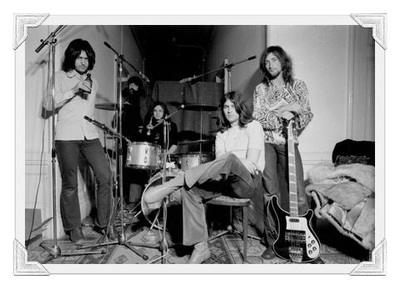 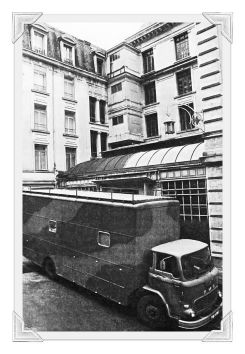 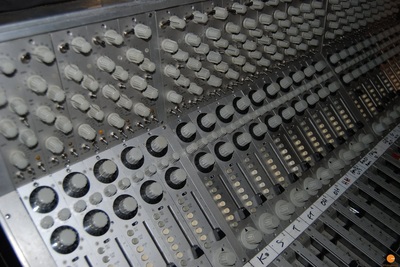 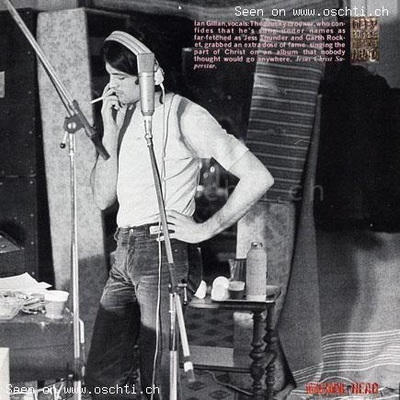 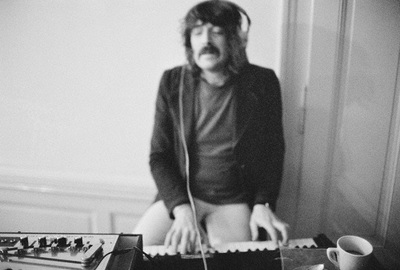 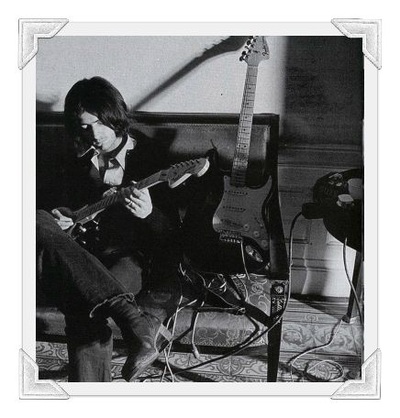 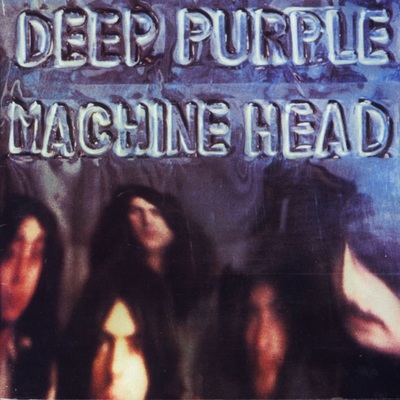 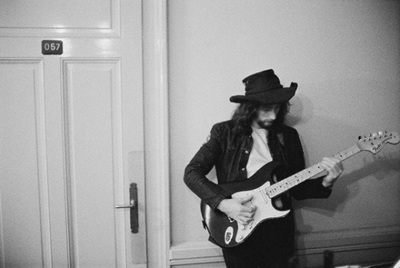 The Rolling Stones truck was not the only mobile studio to use Helios.   Aside from the Manor Mobile, another fine example was the Maison Rouge Mobile which was owned by Jethro Tull's Ian Anderson.   In 1979, Ritchie Blackmore (now in Rainbow) rented the Château Pelly de Cornfeld.  It was an old French castle located in the Rhone Alps, just south of Geneva, Switzerland, across the border.   He rented the Maison Rouge, returning again to the Helios Sound.  The resulting album, Rainbow's "Down to Earth" is one of my favorite recordings of all time, no doubt aided by the impressive sound stage yielded by the old stone and wood in the main dining room where they recorded. 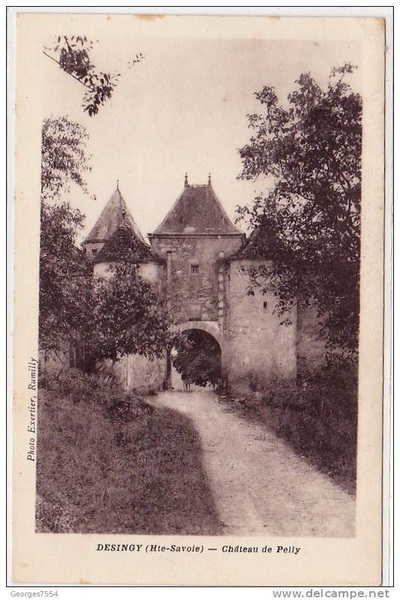 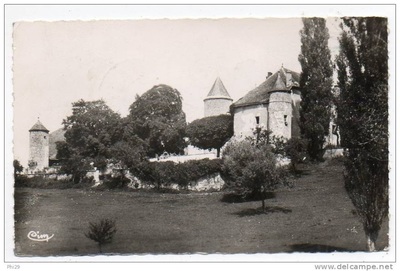 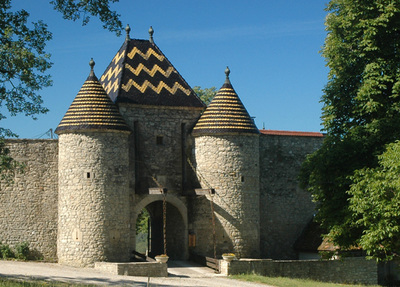 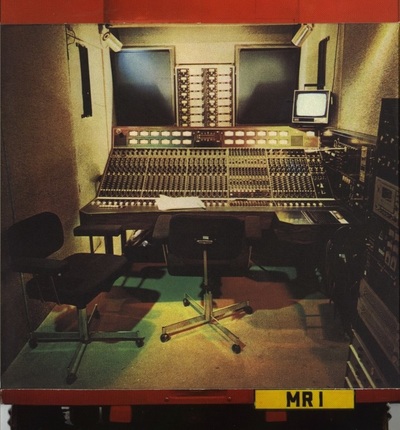 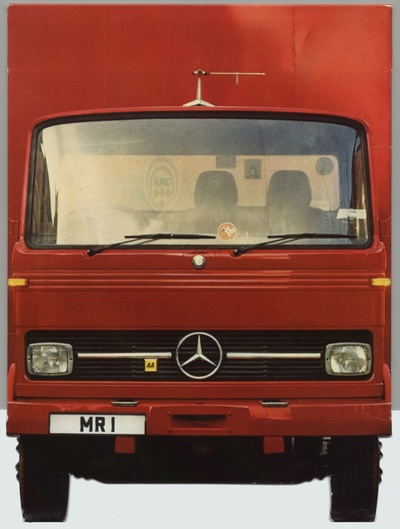 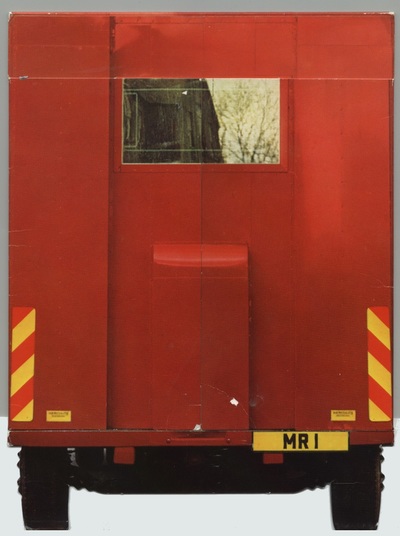 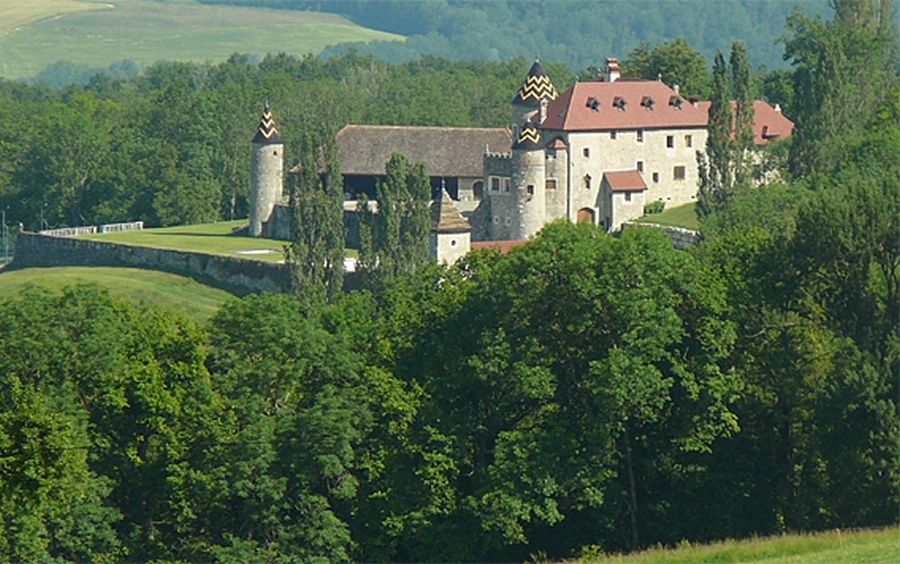 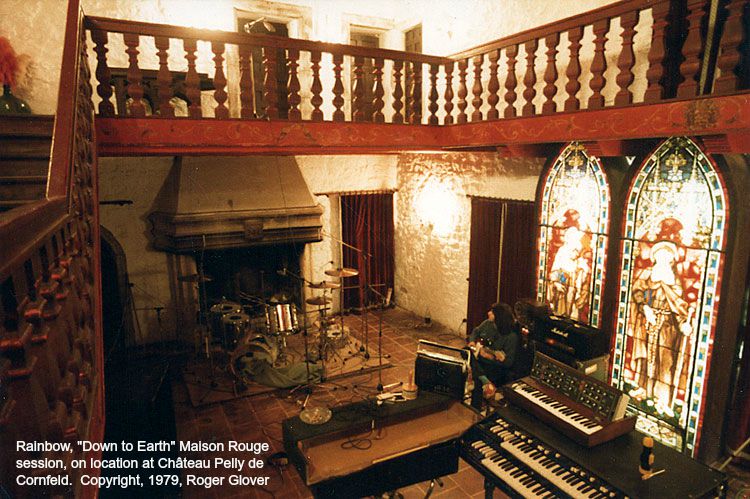 The close of the 1970s saw the end of the Helios company.   Times were changing and studios were looking for a higher fidelity sound to reflect the changing taste in music, and they were seduced by mass manufactured recording solutions that promised to be easier to maintain and carry less operating cost.   American companies like MCI and Harrison proved initially competitive.   By the 1980s, the clean sound of the British SSL and the polished, yet colored, British Neve sound were dominant in the industry.   Bands would often track on a Neve and have it mixed on an SSL console.   For a time it looked like Helios would be forgotten.   Sadly, many of the consoles were abandoned, chopped up,  or left in a poor state of repair.   The Maison Rouge Mobile truck was reportedly stolen in 1983, never to be seen again.

In the decades since, after evaluating the immense legacy of music that were recorded with them, a new generation of studio owners, musicians and recording engineers began to buy the old consoles, often in horrible condition.  They sought information on how to restore them to their working glory.   These were not inexpensive adventures.    In the early new days of the late 1990s, and early 2000s, restoring a Helios, or any other old analog console by yourself to working condition was like going down a rabbit hole.

One leading proponent of the Helios resurgence was an English gentleman by the name of Tony Arnold.   He had purchased the last console Helios made in 1978, and then followed it up by purchasing three more, eventually including the Eric Clapton console.  Dick Swettenham, by now, aging and unable to service the consoles, agreed that Mr. Arnold, with his knowledge of the units, should become officially endorsed to service the old beasts that were still in use.  In time Mr. Swettenham entrusted the original schematics to Mr. Arnold.   Upon Mr. Swettenham's death in 1997 it became clear that the Helios legacy would be left to Mr. Arnold to carry forward.

With the growth of interest from a new generation of musicians, engineers, and even the old musicians who wanted to have the Helios sound working again, a new company was formed by Mr. Arnold.   The revolution of recording to hard disk, leading to the growth of project studios, meant that the demand was no longer for giant consoles, but rather the pre amp and eq modules they had once contained.  After many tests, a copy of the circuit in the Eric Clapton console was made and the Helios was available again to purchase as modules (rather than entire consoles) in the USA circa 2005.

But several original Helios consoles still existed, thus the early purchasers grabbed them and brought them round the old equipment to compare them.  Were they as good as the originals?  Now with time, electronic components age, their values drift and their sound can change.   Sometimes this is good, sometimes it's bad.  On the internet and on forums like gearslutz.com, there waged a battle between those people who had used Helios in their original days and the users of the reissues.   There were different revisions of the Helios in the 9 original years they were made, and like anything practically handmade, sometime parts were used from whatever stock of raw parts were available.   One of the most important parts to any microphone preamplier or amplifier is the sourcing and type of the output transformer.    After feedback from the new internet aged Helios recording community, Mr. Arnold was convinced to switch out the transformers he was using which were copies of what was in the Eric Clapton Helios to the Sowters patterned after the Lustraphones which were  used in the famous "Silver" Helios console inside the Rolling Stones Mobile Truck and at Olympic.

In my opinion, there has never been a better recorded sound than the Helios in the Rolling Stones Mobile Truck.  Just listen to Deep Purple's "Burn" from 1973/4 to hear it.   Luckily the Rolling Stones truck survived and is now in a audio museum undergoing restoration in Calgary, Alberta, Canada.

The reissues at Château Roşu are of the latest Helios build, with the Sowter type transformers, powered at the proper 48 volts, unlike the 500 series lunchboxes that are popular today in project studios.   We also have a line amp modded by Vintage King into the rack so the Helios can get the proper headroom it needs, without compression or limiting being used to boost it before it hits the DAW.

So here we are in the 21st century, able to record again in the same spirit that was used in a Hotel in Switzerland in 1971, or in a French Château in 1979.   Using technology all but abandoned for 20 years by the industry until they realized the mistake they made- that digital never sounded better than Analog; mass produced was never better than hand made.  Rock music is intimate music, even if it is blasting the doors off a castle. 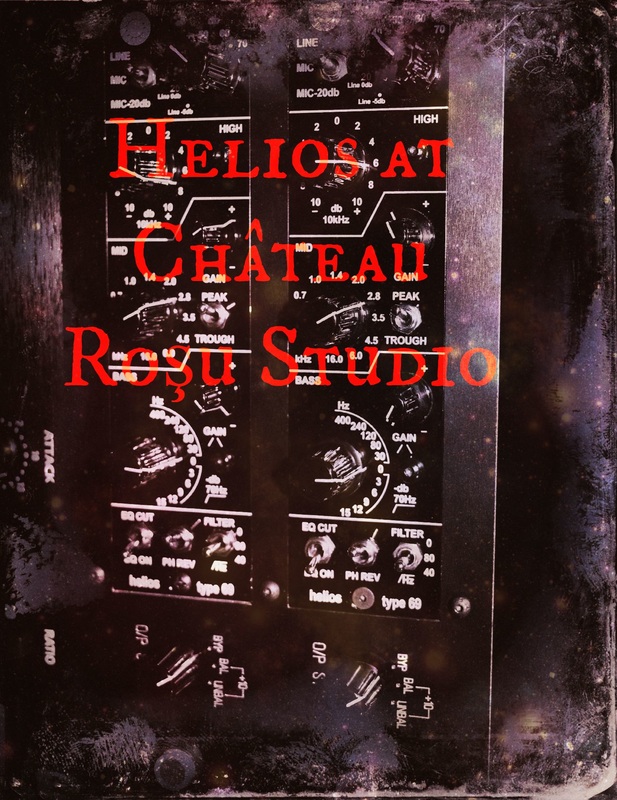 ﻿The following data of just 3 UK studio recordings as listed at Philsbook.com.
Not all may be Helios, but most were!   Musicland, Germany at the bottom.﻿